The second build was a success. It was based on the Instructables guide by the author “tinkerme“. After reading the guide, I had a hankering to try again. 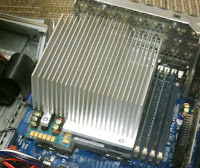 It’s roughly 3″ wide by 6″ long, lots of fins. The raised part for the chip, was cut off with a hacksaw and ground down.

– I was concerned the heat was slipping through the outside fins. Put a shroud around the hot side of the cooler. This would prevent the loss, and gather the heat. Found an aluminium control box from a washing machine. The shroud also prevented the heat from reaching the Thermalright cooler fins.

– little 1-1/2″ x 1-1/2″ square piece of copper. It was used as a spacer/transfer sat of heat to the peltier module. Use a copper pipe, cut length wise, pound flat and buffed up on the grinder.

– Zalman’s cooler paste. **A must have. This grey goop was cheap and was included with most CPU heatsink kits. It really increased the heat transfer and the voltage.

– Thermalright CPU Cooler. Rated for a 120mm fan. Aluminum base

*Note: a standard 4″ computer fan didn’t work. Not sure how other people can get theirs going?

Prop
– The homemade, 2 blade, prop works OK, but the motor gets only up to .23 volts. Plan to work on it and make improvements
– the fan from a blender gets up to .43 volt, but doesn’t push air at a lower RPM
– made a fan blade from a coffee can bottom, works good, lots of shake
– A plastic, 4 blade exhaust fan blade works the best. The only bummer was it’s made from plastic and could melt. So, made a heat shield for the bottom
Testing
– Had it successfully working on the December 7th weekend. The cut in for the fan blade was 100° Celsius (212° Fahrenheit) on the wood stove.
– Once I realized it was turning the wrong way, I reversed the positive and negative leads. It started to push the cold air through the fins and out the other side.