How Not to Transport a Ladder with a Snowmobile

Spent a few days up at the cabin messing around with projects. The weather was quite mild and it made it easier to get outside projects finished. One of them was to go up on the roof and remove snow and fix a leak. I needed an extension ladder to get on the roof safely. Had a spare 30-foot extension ladder at home, so it was brought up to the cabin.  The drive up was quite loud with the wind whistling over the ladder on top of the car. (Must of scared away all the deer in the area!)

Since the main roads were covered with “Black Ice” (that’s ice that can’t be distinguished between the road or water) the drive took a lot longer and I arrived late at night. My family and I decided to walk in and then come back the next day to haul the reminder of supplies in. It’s not always easy to get all your materials onsite. In the winter, everything has to be transported in using a snowmobile and a cargo sled. The object is to make as few trips as possible.

I had to transport a large container of firewood, flooring, lumber and an extension ladder all at the same time. With a bad snow storm approaching, I didn’t have a lot time, so I quickly tied everything on and hoped that it didn’t fall off or get stuck in the forest.

The trail I took started through a driveway that was a solid piece of ice. It was a little tricky to drive through, the cargo sled would move left or right depending on the terrain. Once I got to the trail, it was covered with four feet of snow, but packed down. I had to navigate through the trees and over stumps. A little challenging at times, because you don’t want to catch a ski on a branch or fall into the soft snow near the base of a tree. Managed to hit only one tree with the end of the ladder. It happened on a tight turn and the ladder was sticking out. The bump actually help straighten out the ladder on top of the load. 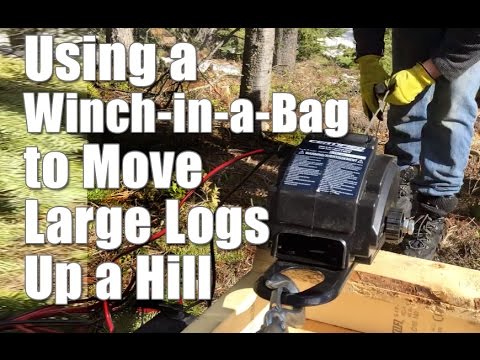 Using a Winch-in-a-Bag to Move Large Logs
The Big Splurge: Snowmobile Dollies
Roof Ice Does a Number to the Small Wind Turbine Tower