This a follow-up video to Snow Blowing in Winter Wonderland. On New Years Eve, one of my neighbours, Mike, dropped by and mentioned he was really pleased the driveway was clear. He said he made it easier to get into his cabin. As a thank you, he gave our family, a fully functional, 1978 Ski-Doo 300 Citation snowmobile. He hadn’t used it for a while and wanted to give it to our kids. The amazing thing was, even though he hadn’t started it for 5 years, he put some fresh, mixed gas into the gas tank, primed it, pulled few times and it started. Wow! That was a totally awesome and a sweet New Year Eve’s gift. (Thanks Mike & Kim!)

“Just introduced this month is the ’78 Citation 300 snowmobile by Bombardier under the Ski-Doo label. It is 329 pounds compared to the Olympic’s 386 lbs., and has more power in it twin 294 cc fan cooled Rotax engine than the Elan 250. The retail price is suggested at $1,445. The new sled has a 29-1/4 inch ski stance, is 90 inches long an overall height of 35 inches to the top of the windshield. It also has an alloy frame, Mikuni carb, rubber track with imbedded fibreglass rods, shocks for skis, disc brakes, and five gallon fuel capacity.”

This particular snowmobile may be a  little long in the tooth, but ideal for the kids to learn on. Mike said that it could barely reach 30 mph, but it was lightweight and easy for the kids to move. 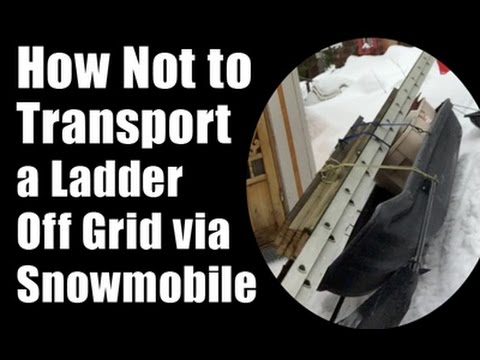 How Not to Transport a Ladder with a Snowmobile
Part 2- Going Off Grid for March Break- Hauling wood, Tour du Cabin & IKEA LED Lights